I was recently attempting to install PHP using an installer (MSI) I downloaded to my local workstation and copied to one of our servers. When I attempted to run the installer I received the following inscrutable warning:

Thanks, Windows, that’s helpful. I had no idea what was happening, especially since I was logged in as an administrator with full control of the file.

As usual, the web was my friend in solving the problem. Windows 2003 Server has a security feature where executables copied from remote systems are blocked for execution unless allowed by an administrator. The feature appears to have been present for a while (since SP2?), but I don’t recall running into it before. As mentioned above, the file in my case was copied from my workstation over SMB; I don’t know if other transfer methods are also affected. I don’t have a problem with the feature, but I do have a problem with how it’s implemented. An indication in the pop-up of why the file could not be accessed would have resulted in a resolution of seconds not … er … minutes.

The resolution is simple enough, go into the properties for the file and you’ll see at the bottom a security warning and a button that allows you to unblock the file. 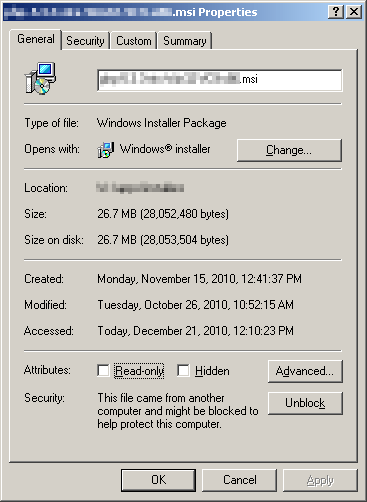 Click the “Unblock” button and you can execute the file as you normally would.